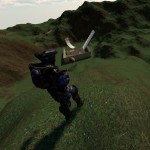 Though Star Forge by indie game developer CodeHatch is still in alpha stage, it quickly hit the top of Reddit. A Voxel-based Sandbox game which has been developed for Microsoft Windows and Mac OS it allows building of bases and customization of guns. Building bases, gathering resources, crafting and surviving on an unfamiliar planet are what the game is all about. You can purchase Star Forge on Steam.

StarForge has a lot of promises because of the excitement it involves in form of land-to-space travel (without any loading times!), terrain deformation, legit physics and procedural generation which are just a few of its prominent features.

Watch the trailer of the game wherein you can enjoy all these features and you can even download a playable build of it. The playable build is not as extensive as the trailer, so don’t expect too much. But good news is it’s free to play!

The playable build begins by throwing you into an open space surrounded by trees and mountains. The developers of Star Forge say that among their inspirations one is Minecraft too which is obvious right from this very beginning. You have the ability to generate boxes, turrets and spinning hammers of doom in concurrence with altering the terrain to build your own base. You can even generate a wave of enemies to check your defenses. Evaluated from the video, all this appears just to be the tip of the iceberg.

One of the striking features of Star Forge is the player physics after being hit. Just check it out by trying to get hit by a spinning hammer or a missile. Your character will fall in an indeed impactful way. Each huge hit will make you scream “OOF!” as you will fall scores of yards away. It’s not yet very perfect, since you infrequently get a sight of what’s below the floor. But remember that this is a pretty early alpha build. Platforming/Jumping doesn’t seem quite right and it can be tough to create your base because of the clumsiness.

Hopefully CodeHatch will go on launching playable builds of Star Forge as they go on adding more elements, unlike Overgrowth or Minecraft. Using the fans’ feedback to make developments in the game is a great business pattern adopted by some indie games, and StarForge is an ideal fit for it.

For now, we can just wait and watch as these great guys work on a greater and more awesome game.